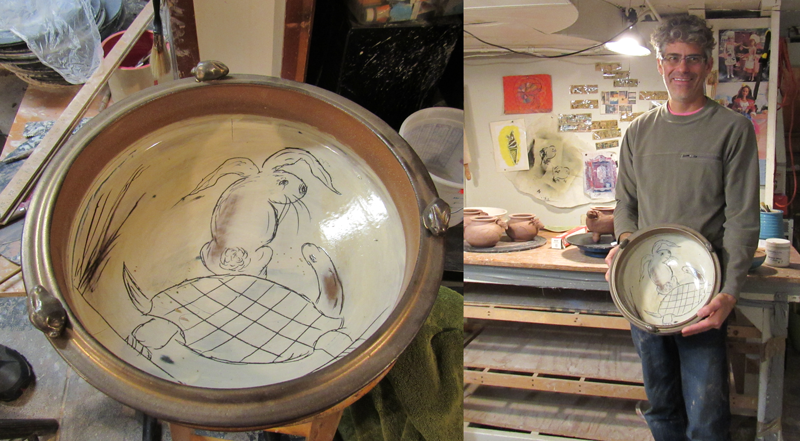 On a mid-November day I walked into a remarkable artist’s life, J. D. Schall. Creative studio and artistic home were shown to me, the fortunate blogger, by one of Louisville’s premier potters. 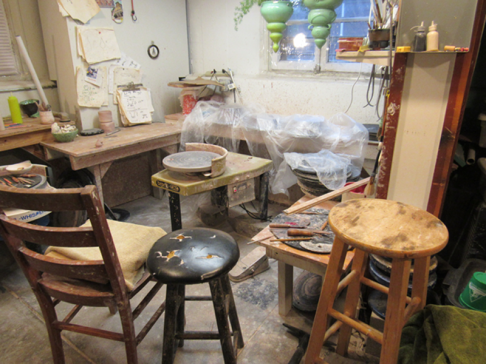 J. D. had just returned from a trip to Mexico and observed that; “Mexicans have symbols from their culture that have been given to them and used for centuries. I’m currently pursuing symbols that have meaning in our culture.” J. D. has spent the previous two years developing work that incorporates his unique interpretations of symbols, such as fleeing rabbits, onto his boldly formed functional works.

How did Schall get to this point in his career? In telling his story, J. D. revealed that his creative processes coincided with his choices of place and work. As a college student at the University of Wisconsin-Whitewater, he majored in English literature and minored in anthropology and religious studies. Imagine seeking knowledge from great minds and times while living in the rolling, isolated landscape of mid-Wisconsin. In his last semester, 1994, J. D. took a ceramics course and continued to make ceramics for three years thereafter; trading ceramic classes for job hours worked.

In 1997, J. D. moved to Baton Rouge, LA and formed Studio 801, a 15-member artists’ cooperative. He also became the head potter for Burts Cason Inc., a pottery design firm specializing in interior design. It was in Baton Rouge that J. D. began throwing large pots, sometimes handling 18 pounds on the wheel. His palette changed from the browns of Wisconsin to the intense colors of southern Louisiana. He learned the ceramics trade while working alongside American merchandisers and ceramic painters from Vietnam.

In 2002 J. D. moved to Louisville and founded Schall Studio and Design. At this point he began to specialize in clean modern design, influenced by 1950’s modernism and the Arts and Crafts movement. Ancient Asian and Greek ceramic influences are also present in his work. J. D. has been successful in building his career through representation at numerous wholesale and retail ceramic shows. He currently sells in galleries and interior design firms nationwide and takes private commissions.

In 2009 Schall had a very impressive exhibition in which he showed large pieces which displayed his love of color, painted surface treatments, and the use of tarnished gold and silver leaf. Simply beautiful.

J. D. describes himself as a builder on the wheel. In his modern design series we see that this process suits the creation of works that confidently handle daily aspects of living, such as dining, gardening, lighting, bird watching. As a builder, Schall pays close attention to each component of each form: base/foot; body; and lip/rim. As a designer he delivers his art through sprayed and brushed color. By placing one deliriously exciting color next to another, often on a bold pottery rim, J. D. brings life and meaning to the sculptural pottery form. 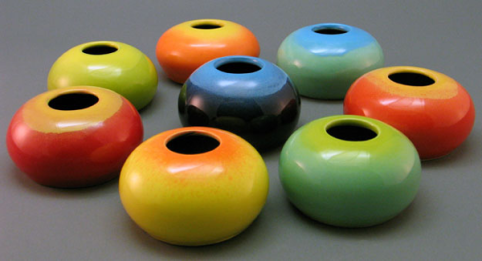 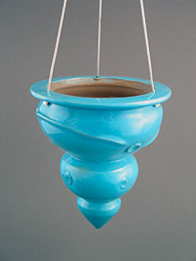 During the past two years Schall has been developing another way to bring meaning to form. He is currently creating expressive narrative symbols and stories derived from nature and fables, such as birds, leaves and flowers, The Tortoise and The Hare and The Three Blind Mice.

We can glimpse the reasoning behind the symbols in Schall’s painting of the Three Blind Mice by viewing a vintage card in his studio where the mice are in danger of loosing their tails. J. D.’s mice have tails intact and are sporting halos. 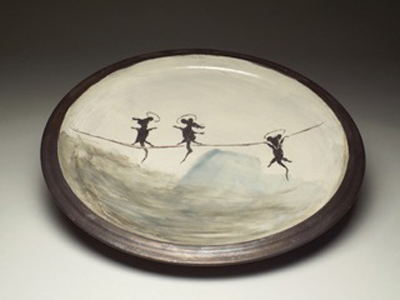 It’s a pleasure to witness an artist as he uses seminal experiences from his past (college studies, wheel building, Asian painting techniques, cultural symbols) to structure a new process for his current works. J. D. explains his motivation: “Just as I have to justify selling modern design by pushing my works beyond the ordinary, I have to work out the reason behind my symbols.”

J. D. Schall’s work is for sale on Thanksgiving weekend, Nov. 23 and 24, at the Pigment Gallery, Mellwood Art Center.  He is represented at AA Clay Studio and Gallery in Louisville. He is also participating in the $20.00 sale at Copper and Kings on December 8th.